Chapter One - A Move To Redwood Harbour 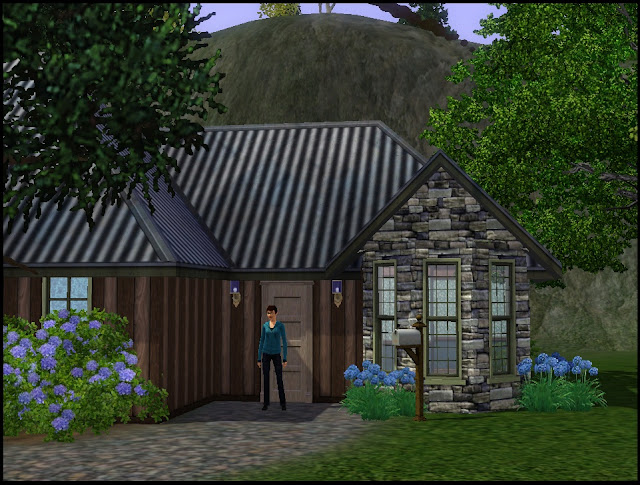 Laura can't believe that today has finally come! She spent so long dreaming about the time when she'd be able to leave home and get her own place. Of course, she didn't expect her own place to be quite so far away from her friends and family, but there was no way she could afford to stay in Jericho. So here she is in Redwood harbour. It's a little quieter than she's used to though....

Standing outside her new house, she breathes in deeply. Fresh air! No city smog or traffic fumes. And she can hear birds singing in the trees which surround her home. No traffic noise either! Redwood Harbour is definitely peaceful, but will it be boring? 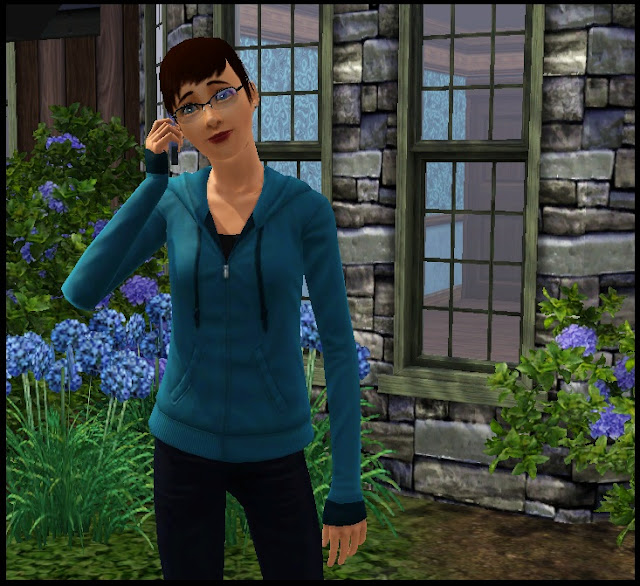 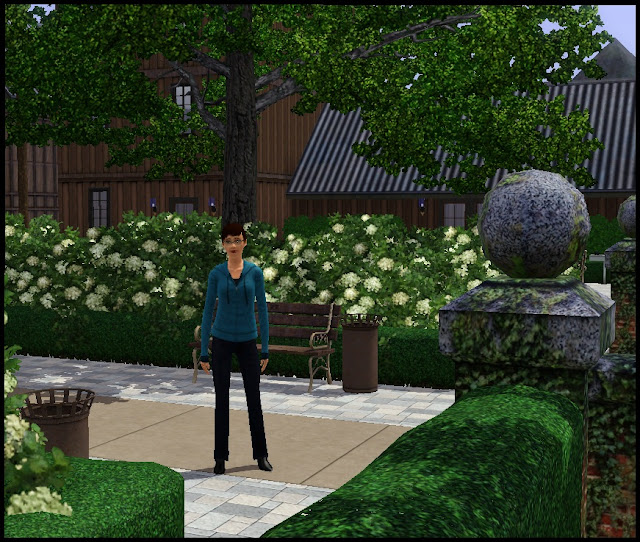 Laura is rather daunted by the idea of the walk into town, so she calls a taxi. The driver drops her off outside the City Hall, and she goes for a wander through the square. It's beautiful, that's true, but it's so quiet! She hasn't seen another person since she left the house, apart from the taxi driver, and he wasn't exactly talkative. Where are all her new neighbours? 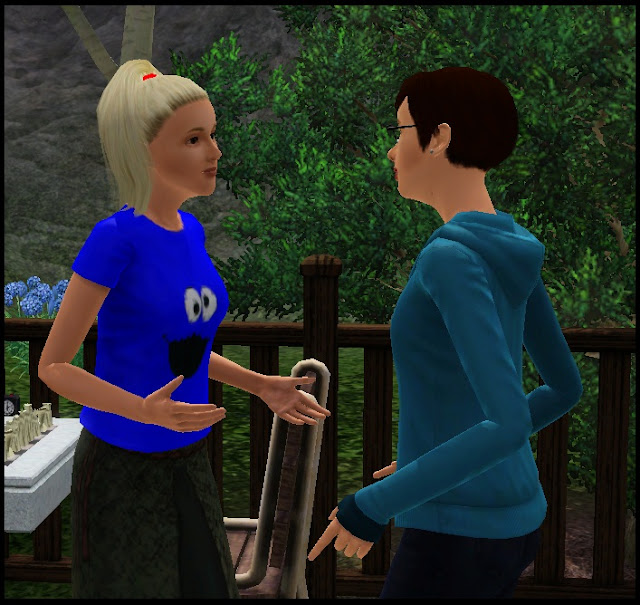 Laura decides to head up to the little park that she saw on her way in to town. It looked like the view of the town would be stunning. And to her amazement she's not the only person there! She quickly introduces herself to the young woman who was there admiring the view. Her name is Caroline Brookes, and she works as a dancer. She has the day off, and apologises for her slightly eccentric choice of outfit, saying that she can never be bothered to make much effort on her days off. Slob Laura can understand that! They chat for a while, but soon Caroline has to go and do her laundry before her next work day. So Laura walks to the edge of the cliff to admire the view. 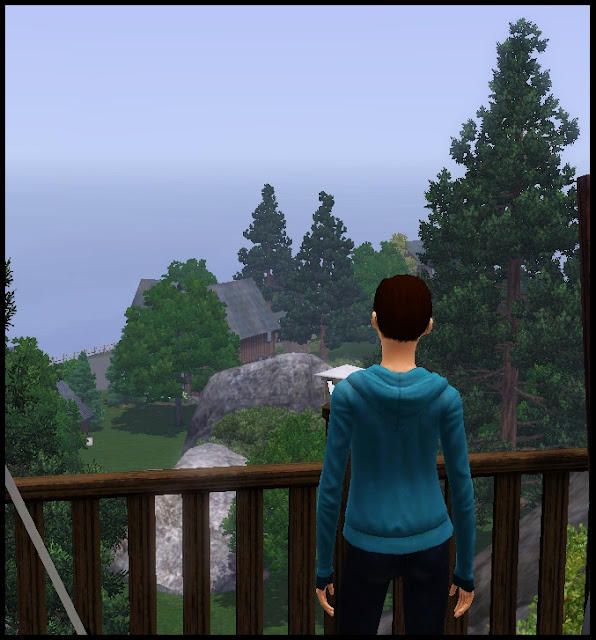 And it's certainly worth admiring! Laura can't wait to come back here when she has a camera and take some nice photos. That sea is beautiful, and the sky, and all the trees..... Wow. Just wow. Laura has a few hours before she needs to head to the airport, so she calls a taxi (again!) and heads back in to town to buy some groceries. She doesn't want to have to head out to the shops as soon as she gets home, so it's worth buying some food that will keep before she leaves. And maybe she'll meet some more people in town! 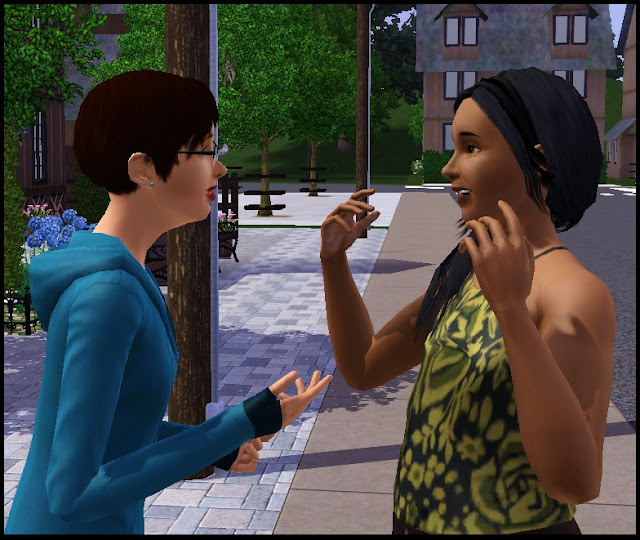 And she does! Jennie Hsu is very happy to meet her new neighbour. She proves to be extremely talkative, and within minutes Laura feels like she knows Jennie's entire life story. Jennie and her husband Jacob moved to Redwood Harbour quite recently, and she's keen to start a family now that they're settled. She and her husband live near the beach, because her husband grew up near the sea, and she loves Redwood Harbour with all her heart! She and Laura chat for a while, until Laura realises that she needs to head to the airport. She dashes home to drop off her groceries, and then calls yet another cab and heads off to Al Simhara!
Posted by Lauratje86 at 01:42

The Random Legacy Challenge was originally created by severedsolo, and is currently hosted here.
If you'd like to join in the discussion about the challenge, there is a thread on Mod the Sims where you can ask questions, view the links to other people's blogs and maybe even make some new friends! Click here to view the thread.

This Random Legacy is set in Redwood Harbour. Hosted by My Sims Realty, it is available for download here.
I also downloaded and placed the two extra lots that are available on the same page, as I wanted a couple of bars! I edited the bars slightly by adding Showtime items, but other than that I hardly made any changes to the world, because it's lovely as it is! 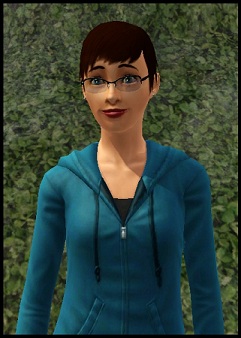 The Buckland family tree can be viewed by clicking here. I may update this before I update the blog, so be warned - there may be spoilers!